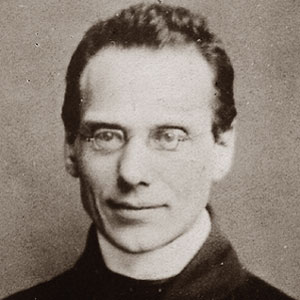 
It was in St. Mary of Victories that the Blessed Francis Xavier Seelos, C.Ss.R., made his Missouri preaching debut. Together with his Redemptorist companions, Fathers Schneider, Jacob and Gulielm, Seelos preached a parish mission in German from the first to fifteenth of October 1865, shortly after the Civil War. The side altar in the south middle portion of the nave of the church honors his role in the historic parish's development. His statue rests on an altar made from the communion rail from old St. Malachy's Church in the Mill Creek Valley (now demolished), and was once used by the now-closed St. Timothy Parish in Afton, MO.

The church is honored to have a first class relic of Fr. Seelos, as well as one of the five known death masks made of the holy priest at his death.

Francis Xavier Seelos was born on January 11, 1819 in Fussen, Bavaria, Germany.  He joined the Congregation of the Most Holy Redeemer (Redemptorists) to minister to the German speaking immigrants in the United States.  He was accepted into the congregation in 1842 and sailed the following year from Le Havre, France arriving in New York in 1843.  Fr. Seelos was ordained a priest in the Redemptorist Church of St. James in Baltimore, Maryland on December 22, 1844. 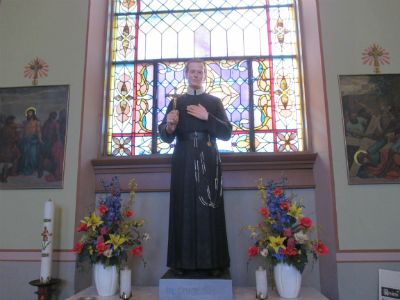 After his ordination, he worked for nine years in St. Philomena Parish in Pittsburg, Pennsylvania, including time as assistant pastor to St. John Neumann.  He also served as superior of the community, as pastor, then as novice master.  Regarding his relationship with St. John Neumann, he said, "he has guided me as a spiritual director and confessor."

Fr. Seelos was always known as kind and approachable, and his reputation as a confessor and spiritual director attracted people from far and wide.  He practiced a simple lifestyle and expressed himself simply.  He was well known as a catechist for little children, and held this as a fundamental aspect of the growth of the Christian parish community.  His reputation in Pittsburgh and in other locations, brought him to the attention of Venerable Pope Pius IX, who in 1854 had declared the dogma of the Immaculate Conception.  The pope offered him the bishopric of Pittsburg, but at Fr. Seelos' request, he was allowed to remain with the people, ministering to their needs and traveling as an itinerant preacher in both English and German.  From 1863 to 1866 he travelled to locations in Connecticut, Illinois, Michigan, Missouri, New Jersey, New York, Ohio, Pennsylvania, Rhode Island and Wisconsin.  This is the time period in which he visited St. Mary of Victories in St. Louis, Missouri.  During this time he also met with Abraham Lincoln to plead for seminarians to be excluded from the conscription for the Civil War.

After serving in Michigan in parish ministry, he was assigned in 1866 to the Redemptorist community in New Orleans, Louisiana.  As the pastor of the Church of St. Mary of the Assumption, he continued his joyful work and attention to the needs of the faithful, especially the poorest and most abandoned.  His ministry there was brief.  In September of that year, exhausted from his work with the victims of a yellow fever epidempic, he contracted the disease.  After several weeks of enduring this illness, he passed on to eternal life on October 4, 1867 at 48 years old.

Please continue to pray for the cause of Fr. Seelos' canonization, and support his shrine in New Orleans.

Oh my God, I truly believe you are present with me.
I adore your limitless perfections.
I thank you for the graces and gifts you gave to Blessed Francis Xavier Seelos.
If it is your Holy Will, please let him be declared a Saint of the Church,
so that others may know and imitate his holy life.
Through his prayers, please give me this favor ...
(here, mention your special intentions)