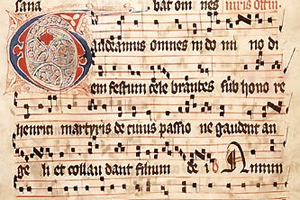 The unique service of Gregorian chant to the Church

The chant we now call Gregorian is the descendent of the basic cantilation that evolved in the Roman rite from its beginning. Although some of it dates from the earliest days of Christianity, using music from the

was long dead, naming it for the great pope was intended to enhance its prestige and special place in the Roman rite. That special place has endured. 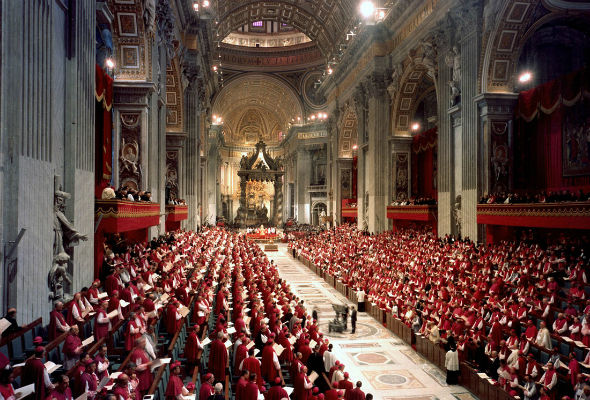 Following the lead of earlier popes, most notably Pope St. Pius X and Pope Pius XII, Vatican Council II declared in its Constitution on the Sacred Liturgy that, ‘The Church acknowledges Gregorian chant as specially suited to the Roman liturgy. Therefore, other things being equal, it should be given the principal place (principem locum) in liturgical services.’ (Sacrosanctum Concilium, Chapter VI, no. 116) And after stating that the vernacular languages should take their proper place, that same document, adds: ‘Nevertheless, steps should be taken enabling the faithful to say or to sing together in Latin those parts of the Ordinary of the Mass belonging to them.’ (Chapter II, no. 54) 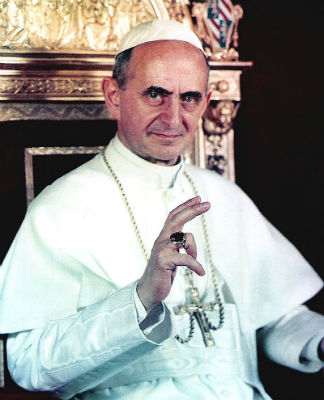 . In the booklet’s preface, Pope Paul wrote that that Gregorian chant provides a service, ‘to be a bond that forms the members of many nations into a single people, gathered together in Christ’s name with one heart, one mind, and one voice.’ He elaborated on this in his cover letter to the bishops, ‘Whenever the faithful pray together as a community, they show at once the complex diversity of a people gathered ‘from every tribe, language, and nation’ and their unity in faith and charity. The diversity stands out in the many languages lawfully used in the liturgy and in the song settings suited to those languages. . . . The unity of faith, on the other hand, stands out in a marked manner through the use of Latin and Gregorian chant.’ 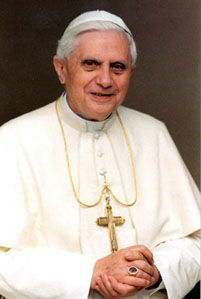 Pope St. John Paul II and Pope Benedict XVI frequently repeated this request, and established offices and programmes to support and promote the use of chant. There are important reasons for this.  Chant plays a fundamental role in the basic structure of the liturgy of the Mass and the Divine Office. In ancient times, the core elements of readings, chants, and prayers, were always proclaimed with a basic form of chant, or cantilation. This blend of speaking and singing was— and is—a way to clearly distinguish sacred and important texts from ordinary conversation, as well as to allow the voice to carry the texts to reach large groups of people in large spaces. It also helped in the memorization of texts, when written versions were scarce. Even today, cantilation is the preferred way to proclaim the readings and prayers, at least on more solemn occasions or in communities that regularly chant the entire liturgy. So the primary function of chant in the liturgy is not purely musical. It is to put music at the service of the liturgy in its work of proclaiming the Word and celebrating the Eucharist. Or in the words of Dom Jean Claire quoting his mentor, Dom Joseph Gajard: ‘Gregorian chant is the authoritative, official commentary which the Church gives to the liturgical texts.’

Pope Benedict XVI explained to us that all the directives of the popes and of the Council are...

...meant to put church music once again at the service of the liturgical text, and of adoration. Church music was to be no longer a performance on the occasion of a liturgical service but rather the liturgy itself: that is, joining in with the choir of angels and saints. Thus it was to be made clear that liturgical music was to lead the faithful into the glorification of God, into the sober intoxication of the faith. The emphasis on Gregorian chant and sacred polyphony was therefore ordered at once to the ‘mystery’ aspect of the liturgy and its Logos-like character and to its link with the Word in history. 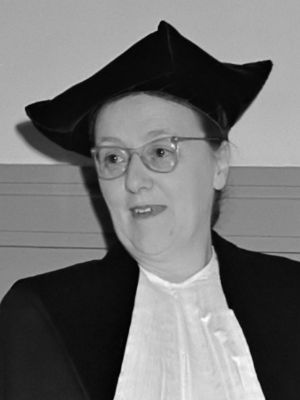 The use of liturgical Latin also supports the chant in the promotion of unity, as well as reinforcing its sense of the sacred. The great scholar of Christian Latin, Christine Mohrmann, affirmed in her book, Liturgical Latin: Its Origin and Character:

. . . Latin used in the liturgy displays a sacral style. The basis and starting point of liturgical Latin is the Early Christian idiom, which, however, through the use of features of style drawn from the Early Roman sacral tradition mingled with biblical stylistic elements, has taken on a strongly hieratic character, widely removed from the Christian colloquial language. In this liturgical Latin the requirements demanded by Hilary for the style of the Christian exegete are realized to the full: Non enim secundum sermonis nostri usum promiscuam in his oportet esse facilitatem. [There is no place here for the loose facility of the colloquial language. (In Ps., 13.1)]. The advocates of the use of the vernacular in the liturgy who maintain that even in Christian Antiquity the current speech of everyday life, ‘the Latin of the common man,’ was employed are far off the mark. Liturgical Latin is not Classical Latin, but neither is it, as is so often said, the Latin which was considered decadent by educated people. The earliest liturgical Latin is a strongly stylized, more or less artificial language. . . . This language was far removed from that of everyday life, a fact which was certainly appreciated, since, at the time, people still retained the sens du sacré [sense of the sacred].

Gregorian chant, then, is a universal musical language. It helps us avoid a danger that Thomas Day, in his book Why Catholic’s Can’t Sing, explained. ‘Throughout the centuries, Roman Catholicism feared the Mass would merely become a specimen of the local ethnic folklore or peprally for nationalism. The church, in its collective wisdom, kept its eyes ever fixed on the job of fulfilling the commands of the Jewish Jesus . . . the Mass was not an occasion for ethnic and nationalistic boosterism.’

This quality of ‘universality’ takes its meaning beyond its Latin roots and actually refers to a totality that extends beyond the boundaries of our planet. Pope Benedict has observed that ‘it is no accident that in the Catechism of the Catholic Church we find the verb to sing for the first time in the section that deals with the cosmic nature of the liturgy, in a quotation from the conciliar constitution on the liturgy: ‘In the earthly liturgy we take part in a foretaste of that heavenly liturgy which is celebrated in the holy city of Jerusalem toward which we journey as pilgrims . . .; with all the warriors of the heavenly army we sing a hymn to the glory of the Lord.’ (Sacrosanctum Concilium, no. 8)

Gregorian chant is a valuable and esteemed gift from God to accompany us on that journey.