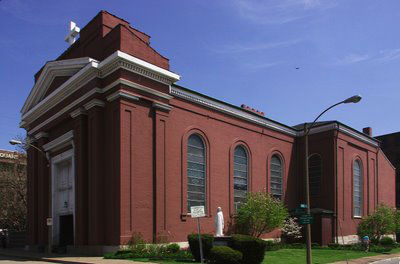 The charming neoclassical red brick edifice of St. Mary of Victories was designed by noted St. Louis architects Franz Saler and George I. Barnett who designed it in accordance with that of the early 16th-Century Mannerist style.  The church was the second Catholic church to be constructed in the city after the Old Cathedral.

The nave is rectangular and, with the transept, forms a cross with the sanctuary at its head. The choir loft is located on the second tier of the two-tier balcony at the rear of the church (see Sisters of St. Mary). Its ornate wooden-carved organ case and stenciled display pipes are among the oldest in St. Louis. Eight tall stained-glass windows with rounded frames grace the nave and the transept, complementing the high arch of the sanctuary. The Egyptian-style doorway to the church is framed by two massive pillars that hold up the heavy wooden cross above the entrance. 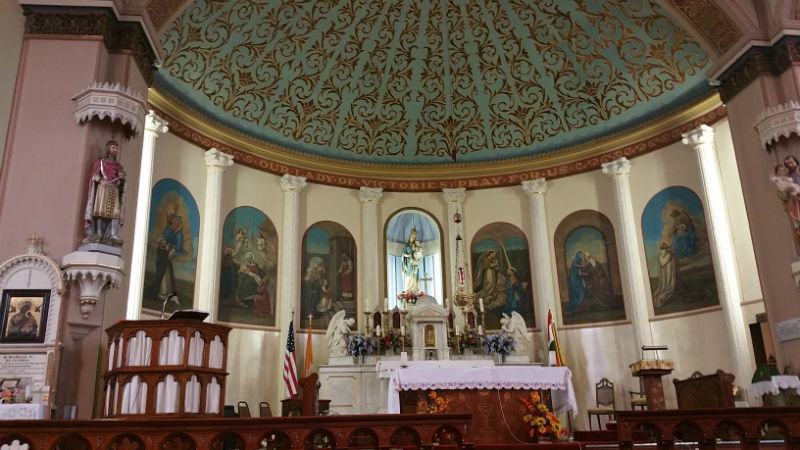 The interior of St. Mary of Victories is also remarkable as the first totally designed liturgical interior in a St. Louis church, developed and fabricated by
Professor Max Schneiderhahn, the city's first professional church artist. Himself a German immigrant, Schneiderhahn studied at a German University and two monasteries, bringing the craftsmanship tradition of liturgical art to the St. Louis area - where it would remain preeminent until the early 1960s. The altars, statuary, communion rail, carvings and the frescoes were conceived and executed by Schneiderhahn, who also painted the oils of the Stations of the Cross.  The ornate statue of St. Mary of Victories, cast in 1844, still stands in the Sanctuary.

The architecture of St. Mary of Victories Church is so acclaimed that the building is listed on the National Register of Historic Places in 1980 and the City Landmarks Registry. The church site itself forms the hub of the pioneer "Chouteau's Landing" District - one of the early commercial and residential immigrant neighborhoods in pre-Civil War era St. Louis.

Its architects would go on to other notable accomplishments. George I. Barnett (pictured below) would design the Romanesque/Byzantine "New" Cathedral Basilica of St. Louis, King of France on Lindell Boulevard and the Governor's Mansion in Jefferson City,  as well as other noteworthy churches and public buildings in the Victorian Era.  Among these works are the nearby Old Courthouse (where the famous Dred Scott case was tried), Grand Avenue Water Tower,  the Henry Shaw Mausoleum, and St. Vincent de Paul Church.  Franz Saler would serve as a Trustee of St. Mary's as well as an accomplished architectural draftsman. 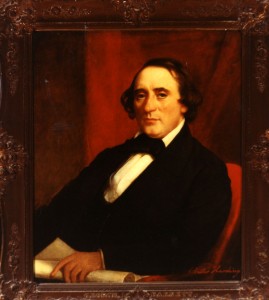